A Jew, a Muslim, and a Christian Walk Into a Bar…

And by a Jew, Muslim and Christian, I mean the presidents of Israel and Palestinian Authority and the Pope, and by bar, I mean the Vatican. 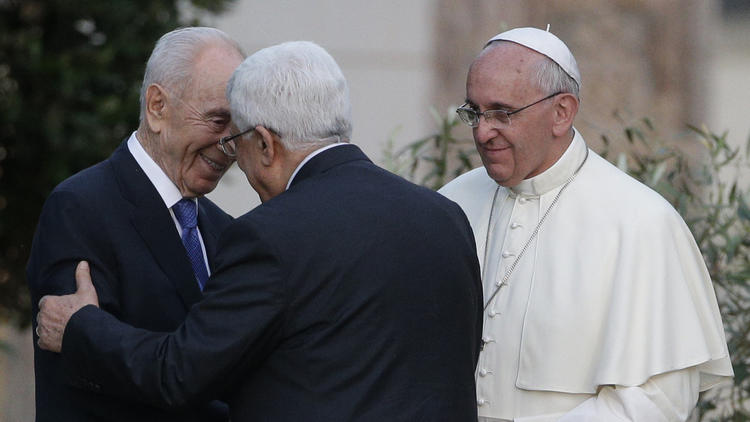 Photo from the LA Times.

On June 8th, after another round of failed peace negotiations, the Pope invited  Shimon Peres and Mahmoud Abbas to the Vatican to participate in prayers for peace between the two nations (For more coverage on the story, see here).

I’ve been following the Palestinian – Israeli conflicts for a long time now. My interest began when I was in 10th grade and put into a simulation with other schools similar to model UN, except the major difference was we were all focusing on the conflicts between Israel and Palestine. Since then I’ve studied it consistantly. It was even the topic for my final analysis paper in one of my university Foreign Policy classes.

The more I look at this issue, the more I see the roots of their problems throughout the world. Often times, people create this completely unnecessary dissonance between themselves and other faiths. Now, I know that many prejudices are rooted in longstanding conflicts between peoples, but I have to believe that as humans, we have the capacity to move on.

One of the ways we can change how we deal with these conflicts, whether they be violent worldwide problems, or simply not letting your kids play with the neighbor down the street who’s belief is different than yours,  is to educate ourselves on different religions, not to prove them wrong, or find things we think are bad, but simply to have a better understanding of our brothers and sisters. I know in my own life, I have seen how creating that understanding can help two or more people see that they have more commonalities than difference.

A few years ago, my family was on a cruise in the Caribbean for my grandparents 50th anniversary. I had noticed there was a rather large Muslim family onboard, but I hadn’t really interacted with them much, just passed them walking around. One day, while docked in Barbados, I saw the family come and sit next to me in the beach. I am always making small talk with people around me, whether it be at the beach, the gym, or the grocery store. I like meeting new people and am just generally sociable, so I decided I would say something to the girl next to me. She was rather quiet and reserved, so I tried to think of something friendly.

It was the standard go to girl complement. (Women are always compliment each other on clothe choices. “I like your shoes,” to which we respond, “Thanks, I like your skirt!” or something like that.) I didn’t really think about it. Her hijab was lovely so I said something. However, the look on her face was one of complete and utter surprise.

“You know what my scarf is called?”

She smiled eagerly and turned to me. “I didn’t think anyone here would know something like that.”

From there we started an absolutely wonderful conversation. She was from Egypt, and about my age. I heard all about her life back there, how it was to travel with her big family, and the cultural differences she saw being with so many Americans. She told me about how she wanted to go swimming, but she was worried people would laugh at her swimsuit (it covered her head to toe), so she just stayed in her jeans. I told her that she shouldn’t care, but she was still very nervous (unlike one of her sisters who I saw unashamedly playing in the water). I talked about university in America, and she told me about her school. Overall, while she seemed shy, she also seemed incredibly excited to talk to me.

I don’t think I’ll ever forget that day, or how easily we got along, or how I had the opportunity to learn so many new things. I’ll never forget how her whole demeanor changed as I expressed just a basic understanding of her religion.

Now, I’m sure many of the world’s leaders are much more educated than I am on different religions and cultures, but I wonder how many genuinely care about using that to foster mutual understanding, or do they simply use it to get what they want?

Many of your average citizens don’t know much beyond what they hear one time on the news, or read in a chain email about other religions beyond their own, and when they do know something, they tend to focus on and distort one or two things, in order to tear down that religion. I’ve always wondered how strong one’s faith or conviction is, if it’s reliant on either dragging down another’s, or an outright refusal to learn more.

Sometimes people like to focus on the bad of a religion to prop up their own. I was taught in one of my religion classes, “You can’t compare their worst to your best. You have to compare your best with their best, and their worst with your worst.” No religion is free from wrong, as they are filled with imperfect people. As Jeffery R. Holland once said, “Imperfect people are all God has ever had to work with. That must be terribly frustrating to Him but He deals with it. So should we. And when you see imperfection, remember that the limitation is not in the divinity of the work.” We should not ignore all the good of one religion just because it has some bad.

I pray that we may all come to a more open and honest understanding of our fellow men and women, and the beliefs that impact their lives. Perhaps if everyone did that, the world would be able to bury its hatchets, and move to a place of peace.

If you are interested in learning about other religions, I’d start with reading their sacred texts. Most of theses are available to on the internet for little to no cost. Just search the word free with whatever text you’re looking for. Here’s a quick list of of where I got mine.

(It should be noted that the Quran was meant to be read in Arabic, and reading a translation is great, but the Arabic form is better.  It should also be noted that there are different translations, some with which the people in the religion aren’t in total agreement.  This may also be true of the other texts listed, with the exception of the Book of Mormon, since there is only one translation.)

6 thoughts on “A Jew, a Muslim, and a Christian Walk Into a Bar…”